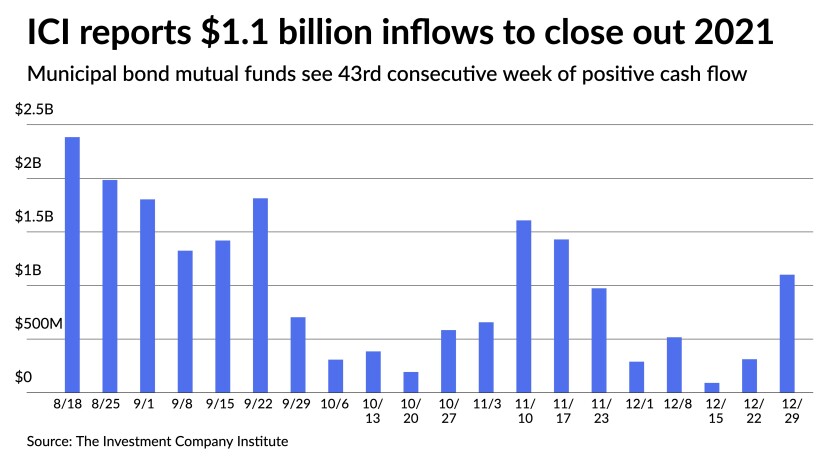 While U.S. Treasuries and equities sold off after release of the FOMC minutes, municipals were largely unchanged on Wednesday, pointing again to a lack of primary supply to provide yield guidance as participants sit back and watch what unfolds in broader markets.

The Federal Reserve’s tone has turned more hawkish in the latest meetings, “and we are seeing the shift in markets with yields up (especially on the long end) with higher real yields driving nominal yields higher, not inflation expectations,” said John Luke Tyner, fixed income analyst at Aptus Capital Advisors. “With a strengthening economy and higher inflation, it looks as if there might be justification for earlier and faster hikes.”

Municipals were holding their own as 10-year Treasury yields advanced to 1.7% as of Wednesday, according to Jeff Lipton, head of municipal credit and market strategy and municipal capital markets at Oppenheimer & Co LLC.

“Technical conditions seem to be guiding munis outperformance and we suspect this trend will continue for now,” Lipton said.

“This will cause some hesitation on the part of buyers, but if cash flows continue to be positive municipal bonds will continue to outperform,” Roffo said.

Separately managed account and exchange-traded fund interest “is certainly supportive of fund flows — yet we do expect intermittent outflows at the very least over the coming months as interest rates trend higher,” Lipton said.

The Investment Company Institute reported $1.101 billion of inflows into municipal bond mutual funds in the week ending Dec. 29, up from $312 million in the previous week.

It marked the 43rd straight week of positive flows into the long-term funds and brought the total inflows for 2021 above $85 billion.

Exchange-traded funds saw inflows at $588 million after $808 million of inflows the previous week.

Refinitiv Lipper numbers to be reported Thursday may paint a clearer picture of how UST losses and a rather staid muni market have affected investors.

Other than a small spike in trading activity Wednesday, the week should be relatively quiet as investors haven’t fully “immersed” themselves into the market following the holiday break, Roffo said.

“The market should increase its activity next week as more investors get involved and more new-issues are priced,” he said.

“It’s mostly money floating around from rollover looking for a home,” he said. “It’s a good time to feed the beast a little. You would never know that the 10- and 30-year Treasury yields are up a lot in the first three days of the year, with little upward movement in muni yields.”

The average seven-day simple yield for the 150 tax-free and municipal money-market funds sat at 0.01%.

Taxable money-fund assets lost $11.81 billion, bringing total net assets to $4.559 trillion in the week ended Jan. 4. The average seven-day simple yield for the 778 taxable reporting funds was steady at 0.01% from a week prior.

FOMC and jobs
The Federal Open Market Committee said it believes rate hikes may need to be earlier or quicker than earlier believed, but it expects to follow its previous normalization routine, using communication to foretell any moves and staying flexible to allow for adjustment based on data.

“Participants generally noted that, given their individual outlooks for the economy, the labor market, and inflation, it may become warranted to increase the federal funds rate sooner or at a faster pace than participants had earlier anticipated,” according to the minutes of its latest meeting minutes. “Some participants also noted that it could be appropriate to begin to reduce the size of the Federal Reserve’s balance sheet relatively soon after beginning to raise the federal funds rate,” given expectations of a strong economy with high inflation and the elevated Fed balance sheet.

Omicron is seen as less of an economic threat, but the panel, Aptus Capital’s Tyner said, “stuck with the data dependency tone (which leaves room to totally flop hawkish tilt where the economy/ inflation data to slow — although we think this is unlikely).”

It’s unclear, Tyner said, “whether the market has enough fundamental strength to stand on its own.”

Marvin Loh, senior macro strategist at State Street Global Markets, said, “The path to recovery was not viewed as threatened by Omicron although it was referenced as a potential downside risk to activity. This view may have changed given the rapidly rising infection rate and new restrictions that have been imposed since the Fed met in mid-December.”

Some members expect the future will include a less accommodative monetary policy and said, “the Committee should convey a strong commitment to address elevated inflation pressures.” Yet, they suggested “a measured approach to tightening policy” that would give the FOMC the ability to react to data.

The panel also prefers to use the federal funds rate target rather than the balance sheet to implement monetary policy changes. The discussion also noted differences between this instance and previous situations, and “would have to take these differences into account in removing policy accommodation,” the minutes said.

“There was a considerable amount of time dedicated to the size of the balance sheet and the timing and process that will be used to shrink it,” noted Loh. But not much agreement. “Recall that it took two years after the start of the last hiking cycle to start the QT process, although the labor market and overall economy was much weaker than where we are now.”

Quantitative tightening “on a quicker time frame,” would be “reasonable,” he said, although “concerns over the impact on market liquidity and particularly on the treasury market was cited in the minutes, indicating that it will be heavily discussed this year.”

Expect liftoff in mid-year, and perhaps balance sheet reduction by yearend, he said. “There is still a great deal of uncertainty in the data, which the Fed will assess over the next few meetings as it decides if it needs to change its rate hike signals.”

The ADP private payrolls report showed 807,000 jobs added in December after a downwardly revised 505,000 gain in November, originally reported as a 534,000 climb.

Economists polled by IFR Markets expected 413,000 jobs to be added.

“Over 80% of the job growth in December was in hard-hit service industries, although goods producing jobs climbed by the most since September 2020,” said Scott Anderson, chief economist at Bank of the West. “Job gains were broad-based across industries, with the largest increases in leisure & hospitality (+246,000), trade, transportation & utilities (+138,000), professional & business services (+130,000) and education & health services (+85,000).”

The timing was good for the report, according to ADP Chief Economist Nela Richardson. “The fallout from the Delta variant faded and Omicron’s impact had yet to be seen,” she said. “Job gains were broad-based, as goods producers added the strongest reading of the year, while service providers dominated growth.”

Since the report doesn’t account for the impact of Omicron, Edward Moya, senior market analyst at OANDA, said, “some traders are shrugging off the strong report.”

“The omicron impact could have a bigger impact with the January nonfarm payroll report,” he said, “but regardless the labor market recovery should pick up by the Fed’s live policy meeting in March.”

The nonfarms payroll report on Friday, may beat forecasts, Moya said, “and if it doesn’t traders will just expect the following month to make up for the miss.”

Here are the top spots to shop for the winter vacation home of your dreams
Here’s how to prepare if you want to buy a home in this competitive market
Fed defers to elected officials on issuing digital currency
Stocks making the biggest moves premarket: Delta Air Lines, Moderna, Virgin Orbit and others
Pioneer Woman Ree Drummond Talks About Her New Bed And Bath Lines At Walmart