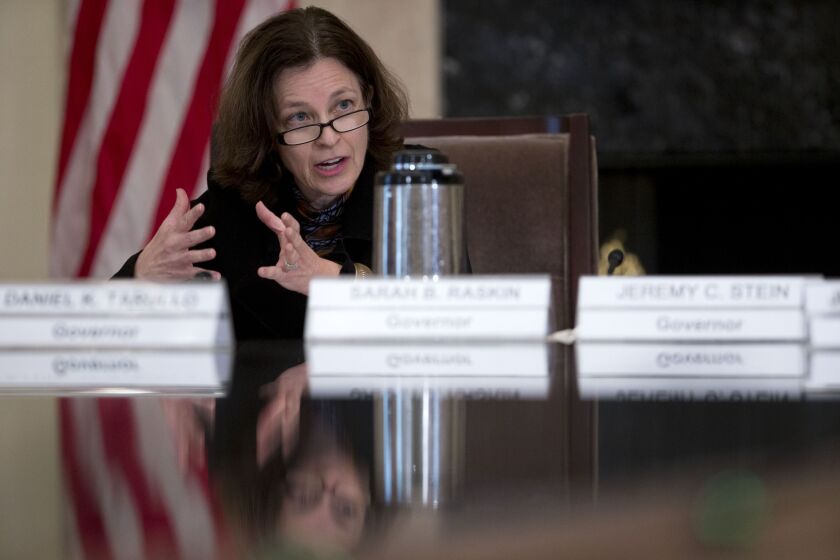 WASHINGTON — The Biden administration appears close to naming a Treasury Department veteran and leading voice on fighting climate-related financial risk to the top bank-regulatory job at the Federal Reserve Board.

Sarah Bloom Raskin — who was the No. 2 at Treasury and a Fed governor in the Obama administration — has emerged as the top candidate for vice chair of supervision at the central bank and could be nominated as early as this week, according to several news outlets.

If appointed, Raskin likely would be welcomed by progressives eager for a stronger bank regulatory focus on climate-related issues, as well as banking’s impact on low-income consumers. This would deviate to some extent from policy priorities of former Trump-appointed Vice Chair for Supervision Randal Quarles, who was more focused on regulatory relief, observers said.

“Vice Chair Quarles was a lawyer for banks. Sarah Bloom Raskin has taken a completely different perspective and has thought about what is best for banking customers and the banking system as a whole,” said Todd Phillips, the director of financial regulatory and corporate governance at the Center for American Progress.

While Raskin’s views on climate change risk could make her a target for some Republicans who think the subject should be off-limits for the Fed, her experience in the capital — including having undergone two successful confirmation processes — could ease her path to Senate approval, according to some experts.

The Senate approved Raskin in voice votes when she was nominated as a Fed governor in 2010 and as deputy Treasury secretary in 2014.

Currently, two other key Fed nominations — one to give Chair Jerome Powell another term and another to promote Gov. Lael Brainard to the nonsupervision vice chair seat — are pending.

“Given [Raskin’s] previous confirmations, I think she’s probably in a stronger position” than other potential nominees, said a Senate staffer who spoke on the condition of anonymity. “Is the vice chair of supervision going to get more scrutiny than just a Fed governor? Maybe. But I think she’s a known quantity and probably has less controversy.”

Since leaving government, Raskin has taught at Duke University Law School and taken particular interest in how climate change has altered the risk management landscape for banks. She is a member of the Regenerative Crisis Response Committee, a group of academics and former policymakers focused on identifying monetary and financial regulatory policies to help move the U.S. to net carbon neutrality before 2050.

In a 2020 report for Ceres, Raskin said that “central banks and other financial regulators know that when it comes to curbing the effects that climate risk will have on the economy, particularly the heightened chance that such risks will bring about economic catastrophe, leadership must exist and concerted action must be taken.”

She told Politico in July of that year that she does not view climate-related financial risk management “as a social policy.”

“I’m looking at this as economic resilience and financial institution resilience. I see it as integral to how we actually manage risk,” she said.

The Fed has already embarked on an exercise known as “scenario analysis” to measure the impact of climate change on financial institutions and markets, but so far has stopped short of incorporating climate change effects into its regular bank stress tests.

Some Senate Republicans, however, could raise objections to Raskin potentially bringing a sharper climate change focus to the Fed. Key GOP leaders such as Sen. Pat Toomey of Pennsylvania, the top Republican on the Senate Banking Committee, have criticized Fed efforts to assess climate risk in the financial system, saying that it is a political issue and financial regulators should stay in their lane.

White said Raskin, who is married to Rep. Jamie Raskin, D-Md., “balances micro and macroeconomic analysis with the need to protect consumers and to make sure financial institutions are safe and sound.”

“She recognizes the impact that … [regulatory] policies have on the lives of real people,” White said.

Raskin or a different Biden-appointed vice chair of supervision would also face the decision of whether to roll back prior regulatory relief measures spearheaded by Quarles, including revisions of the Fed’s stress-test process and tailoring reforms of certain capital and liquidity requirements.

Some observers believe she could take a pass on overhauling Quarles’ agenda, in part because she would need to persuade other Fed board members who supported the prior policies, including Powell. But Raskin may choose discrete topics to revisit, such as whether regulators went too far in easing the Volcker Rule.

Other key areas for a vice chair of supervision to address are how to regulate cryptocurrency and the future of a key capital measure known as the Supplementary Leverage Ratio.

“I do not think she will try to reverse everything Quarles did because that is a formidable undertaking of lengthy proposals that will limit the ability to do anything new,” said Karen Petrou, managing partner at Federal Financial Analytics.

“She’ll likely take on climate, crypto, maybe reopening the Volcker Rule and covered funds, certain aspects of [foreign bank] regulations. She will also play a major role in the Fed’s issues in pending Treasury-market reform, like what to do about the SLR.”

Phillips agreed that Raskin would need to pick her battles “rather than simply just rolling back the rollbacks.”

“Times change, and she would need to take a look at the way things stand today, and not just do a straight reversion to the Obama-era regulations,” he said.

She could bring a more aggressive stance on annual Comprehensive Capital Analysis and Review tests and how to grade them. She could also take a tougher stance on the countercyclical capital buffer, which could be applied when the economy is strong to curb risky lending from banks with more than $250 billion of assets or $10 billion of nonbank liabilities. Officials have been holding this rate at zero.

“She will lead the agenda that progressives in Congress want, but she has a history in Maryland, at the Fed and at Treasury of not making herself the story, just diligently working on the policy,” Mills said.