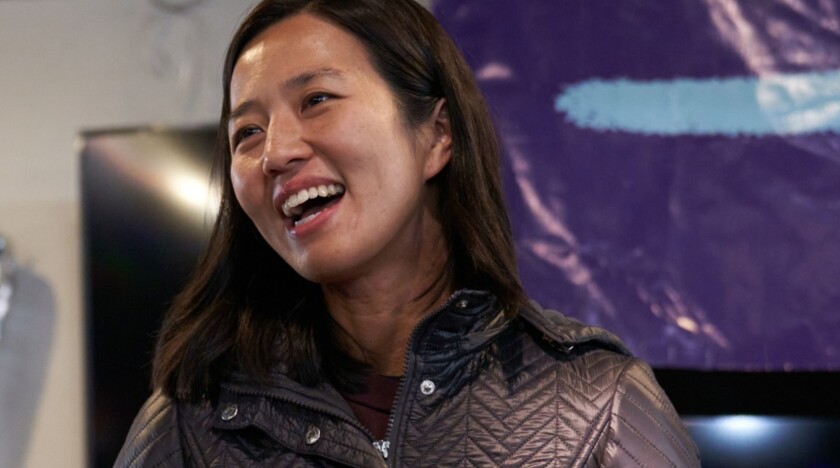 Shortly after her swearing in as Boston mayor, Michelle Wu acted on her signature campaign theme, free transit rides.

Sidestepping the state-run Massachusetts Bay Transportation Authority, Wu asked the City Council to approve the use of $8 million in federal rescue funding to expand a pilot program for two more years, to backstop rides on bus routes that traverse three of the city’s poorer neighborhoods.

Wu, 36 a former City Council member, is the face of Boston’s progressive movement. Her election, though, was an outlier nationally as voters rejected hard-left candidates and initiatives.

A case in point was the loss of Buffalo socialist candidate India Walton, who defeated four-term incumbent Byron Brown in the Democratic primary but was decisively beaten by Brown in November.

While races nationwide had their own sets of local concerns, some consistent themes emerged across the board, according to Krist.

“Buffalo showed that the electorate does not embrace socialism,” he said.

Results from Minneapolis and Seattle, according to Krist, reflect opposition to defunding the police and mass decriminalization.

Minneapolis voters rejected a proposal — which stemmed from the killing of George Floyd by a police officer in May 2020 — to replace the city’s police department with a Department of Public Safety. Mayor Jacob Frey, who had opposed the measure, survived a tough re-election challenge.

Wu, who defeated moderate Annissa Essaibi George with 64% of the vote, became Boston’s first female mayor in a race where every major candidate was identified as a person of color and the top four finishers in the open September primary were women.

City politicians over the years tended to be male and of Irish or Italian descent.

Wu’s approach to the “T,” as locals call the MBTA, comes as systems across the country — among changing commuter patterns amid the lingering COVID-19 pandemic — balance social-justice and revenue concerns with state-agency-city dynamics.

“I think it’s a very good use of money. I happened to have talked about free bus routes in the 1970s and not a lot of people listened,” said Boston historian Larry DiCara, a public finance attorney and former City Council president.

“We should work hard to subsidize all of our public transportation deeply to benefit more people, to get more people to use it,” DiCara said on a Bond Buyer podcast.

In a nod to her progressive base, Wu also paused the city’s removal of homeless people at Massachusetts Avenue and Melnea Cass Boulevard — “Mass and Cass,” ground zero to the city’s opioid crisis — and signed a measure divesting city funds from the fossil fuel industry.

“Why they should pay to give everybody in Boston a free ride does not make any sense to me,” Gov. Charlie Baker said before the election.

“Somebody’s going to have to come up with a lot of money from somebody, and I do think if the city of Boston is willing to pay to give free T to the residents of the city of Boston, that’s certainly worth the conversation, I suppose.”

Wu faced some headwinds from the 15-member council. City Council member and former mayoral candidate Andrea Campbell, who favors the concept but cited open questions, asked for a public hearing before the appropriation of federal funds.

The pushback, however slight, could prep Wu for an upcoming budget battle. Two-thirds of city voters approved a measure enabling the council to change lines in the budget. Previously, it could only vote on the budget up or down.

“I think Michelle has to balance her zeal for dramatic change with the realities of the world as we know it,” DiCara said. “And the new system with the City Council, which she voted for, will make her first budget year more difficult.”

For years, Boston has operated under a strong-mayor, weak-council system known as Plan A. Opponents of the new measure argued that budget factionalism could jeopardize the city’s triple-A bond rating.

“It’s the uncertainty which is troubling to people in financial markets,” said DiCara, who ran for mayor and state treasurer and was acting mayor during the blizzard of 1978. “I think there will be some uncertainty as to how changes to the budgetary system are actually undertaken.

“The city has a triple-A bond rating because under mayors [Thomas] Menino and [Martin] Walsh, we had year after year of balanced budgets, a slight surplus and a little bit of money in the bank.

“We were able to check off all the boxes [for] the folks at the rating agencies, and I expect Boston will retain a good bond rating.”

In Buffalo, Walton stumbled in her bid to become the first self-declared socialist to oversee a major American city since Milwaukee’s Frank Zeidler in 1960.

A state fiscal control board that former New York State Gov. George Pataki created helped spawn three Buffalo upgrades between 2012 and 2016, while Brown was in office.

“In this case, the incumbent mayor had to mount a write-in campaign after losing the primary to an avowed socialist,” Krist said.

“It’s not that socialism has never had its day in the U.S. It’s just hard to reconcile that hard red nature of somewhere like North Dakota today with its history some 110 years ago as a laboratory for socialist thinking.

“For now, it does not seem to be a viable policy option.”

The Most Expensive U.S. Real Estate Sales For 2021
Crypto.com breach may be worth up to $33M, suggests onchain analyst
Here are the top spots to shop for the winter vacation home of your dreams
Blockchain and the evolution of business models in the game industry
Binance CEO’s net worth hits $96B, Jack Dorsey launches BTC defense fund, Bill Miller apes into Bitcoin: Hodler’s Digest, Jan. 9-15