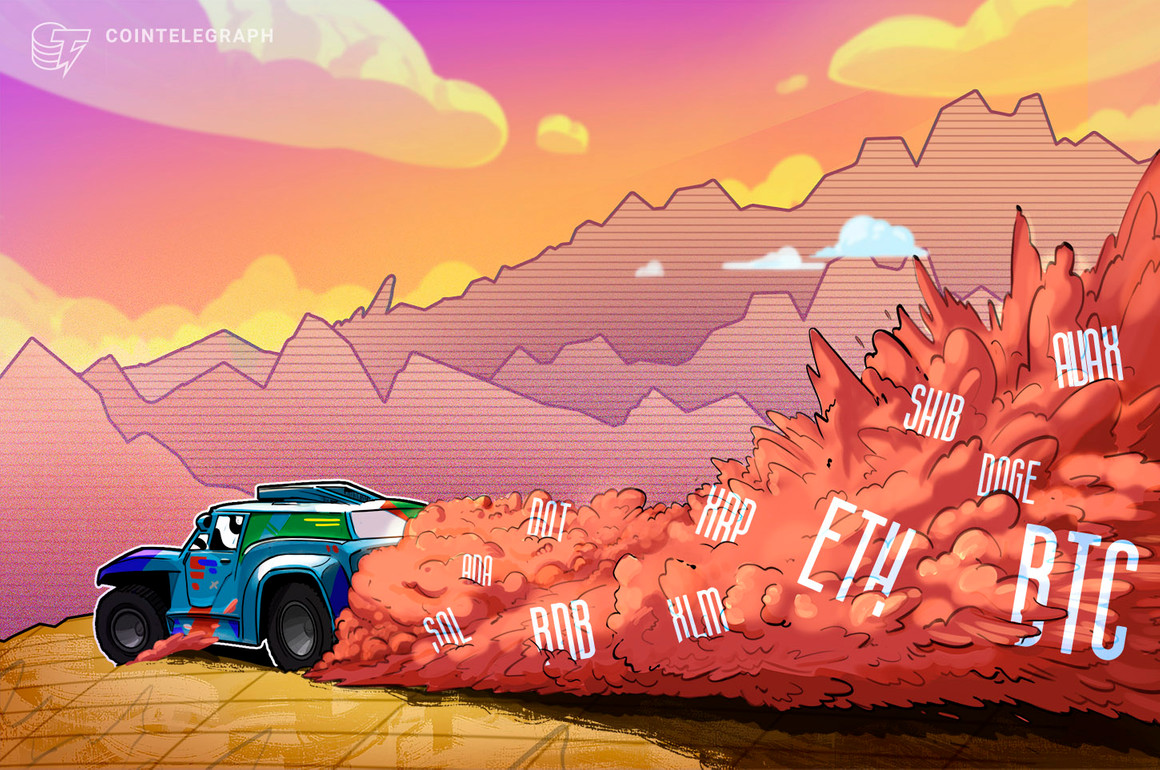 Bitcoin (BTC) and most major altcoins sold off along with global equity markets and crude oil on Nov. 26. The markets were roiled on news of a new coronavirus variant detected in South Africa that is worrying scientists due to its large number of mutations in the spike protein.

The sharp fall has resulted in cross-crypto liquidations of over $750 million over the 24-hour period but the funding rates across exchanges remain elevated. This suggests that the selling may not be over yet.

Bitcoin’s monthly close for November is most likely not going to hit analyst PlanB’s worst-case scenario of $98,000. This will be the first miss after the model had accurately predicted the end-of-month price levels for August, September and October. However, the stock-to-flow model creator believes that the target objective of $100,000 for Bitcoin in this halving cycle still holds good.

Is the current decline a mouthwatering Black Friday deal or the start of a short-term bear phase? Let’s study the charts of the top-10 cryptocurrencies to find out.

The bulls pushed Bitcoin back above the breakdown level at $58,000 on Nov. 25 but they could not clear the barrier at the 20-day exponential moving average ($59,510). This may have attracted profit-booking from traders.

The selling picked up momentum after breaking below $55,317 today and the next stop could be the psychological support at $50,000.

If the price rebounds off this level, the buyers will attempt to push the price above the 20-day EMA. If they succeed, it will indicate that the selling pressure may be reducing.

Alternatively, if the next rebound again turns down from the 20-day EMA, it will indicate that the sentiment has turned negative and traders are selling on rallies. That will increase the possibility of a break below $50,000.

If that happens, the BTC/USDT pair could witness panic selling that may pull the price down to $40,000.

Ether (ETH) broke above the 20-day EMA ($4,336) on Nov. 25 but the up-move proved to be a bull trap as the price turned down sharply today and dropped to the neckline of the developing head and shoulders (H&S) pattern.

The bulls are defending the neckline aggressively. If the price rebounds off the neckline, the buyers will attempt to clear the overhead resistance at $4,551. That could clear the path for a retest of the all-time high at $4,868.

Conversely, a close below the neckline will complete the bearish pattern. That could intensify selling and the ETH/USDT pair could decline to the $3,600 to $3,400 support zone. If this zone also cracks, the next stop could be the target objective at $3,047.

Binance Coin (BNB) soared above the overhead resistance at $605.20 on Nov. 25 but the bulls could not clear the strong hurdle at $669.30. This indicates that bears are defending this level with vigor.

The failure to rise above $669.30 may have prompted profit-booking by short-term traders. That has pulled the price back below the 20-day EMA ($590) today. The bears will now try to sink the BNB/USDT pair to the 50-day simple moving average ($539).

A break and close below the 50-day SMA may indicate a trend change. The selling could accelerate on a break below $510. The pair could then drop to $450.

The bulls will have to push and sustain the price above the overhead resistance zone of $669.30 to $691.80 to signal the resumption of the uptrend.

The downsloping 20-day EMA and the relative strength index (RSI) below 43 indicate that bears have the upper hand. This negative view will invalidate if the price turns up from the current level and breaks above the resistance line of the triangle.

Cardano (ADA) formed an inside-day Doji candlestick pattern on Nov. 25, indicating indecision among the bulls and the bears. This uncertainty resolved to the downside today with a break below $1.58.

The ADA/USDT pair has a strong support at $1.50. Although the downsloping moving averages indicate advantage to bears, the RSI in the oversold territory suggests that the selling may have been overdone in the short term.

The bulls may attempt a relief rally that is likely to face strong selling at the 20-day EMA ($1.85). If the price turns down from this level, the bears will make one more attempt to sink the pair below $1.50. If they succeed, the pair could drop to $1. The first sign of strength will be a break and close above the 20-day EMA.

Although bulls defended the $1 support for the past few days, they could not push XRP above the 20-day EMA ($1.08). This suggests a lack of demand at higher levels.

The selling accelerated today and bears pulled the price below the psychological support at $1. The XRP/USDT pair could now decline to the strong support at $0.85. If the price rebounds off this level, the bulls will attempt to push the price above $1.

If they manage to do that, the pair could attempt to gradually move up toward the overhead resistance at $1.24. Conversely, if the price turns down from $1 and breaks below $0.85, the pair could decline to $0.70.

Polkadot (DOT) bounced off the uptrend line on Nov. 25 but the bulls could not sustain the higher levels. The selling intensified today and the price dropped below $37.53, completing a bearish H&S pattern.

The DOT/USDT pair could now drop to $32 and later to $26 where the bulls may try and arrest the decline. On the upside, the breakout level at 38.70 is an important level to keep an eye on.

If the price turns down from this level, it will suggest that the sentiment remains negative and traders are selling on rallies.

Conversely, if bulls drive and sustain the price above $38.70, it will suggest strong demand at lower levels. A break and close above $43.56 could tilt the advantage in favor of the bulls.

Dogecoin (DOGE) attempted a relief rally on Nov. 25 but the long wick on the day’s candlestick shows that bears sold near the downtrend line.

The selling picked up momentum today and the DOGE/USDT pair plunged below the immediate support at $0.21 and even broke below the strong support at $0.19. The bulls are currently attempting to defend the $0.19 level.

If the price bounces off the current level, the bears will again pose a stiff challenge at $0.21. If this level flips to resistance, the likelihood of a break below $0.19 increases. If that happens, the pair may drop to the critical support at $0.15. The first sign of strength will be a break and close above the 20-day EMA ($0.23).

Avalanche (AVAX) rebounded off the 38.2% Fibonacci retracement level at $112.63 on Nov. 25 but the long wick on the candlestick shows that traders sold on rallies.

The AVAX/USDT pair turned down today and has dropped to the 20-day EMA ($105). This is an important level to watch out for because, during uptrends, traders buy on dips to the 20-day EMA. If the price rebounds off the current level, the bulls will try to push the price to $130.

This indicates that traders are selling on rallies near overhead resistance levels. The bears have pulled the price back below the $0.000040 level today, increasing the possibility of the resumption of the correction.

The SHIB/USDT pair could now complete a 100% retracement and drop to $0.000027. This bearish view will invalidate if the price turns up from the current level and breaks above the 20-day EMA. The pair could then rise to $0.000052.