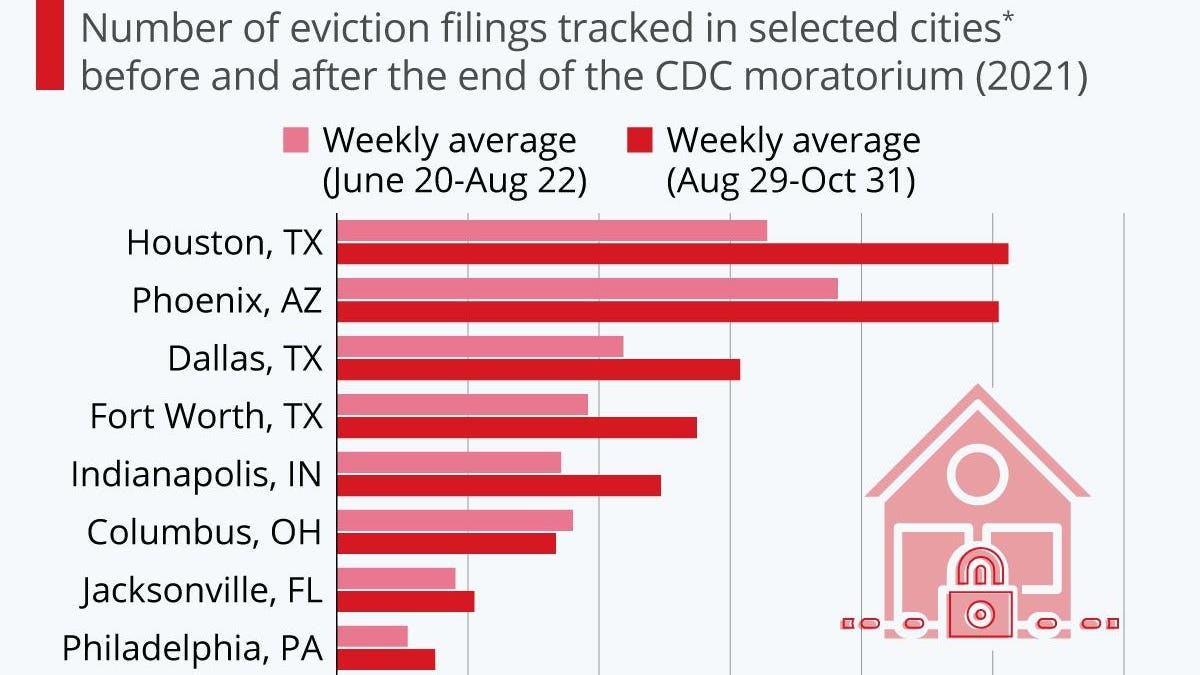 Since the Supreme Court ended the Centers for Disease Control and Prevention’s Covid-19 eviction ban on August 26, more Americans in bigger cities have found themselves out of house and home. This is according to numbers found on website Eviction Lab, which tracks eviction filings where they are available on a weekly basis.

Considering eight of the largest cities out of those tracked by the project, average weekly eviction filings were up in seven. In Houston, they rose by as much as 56%, while the increase was at 40% or above in Dallas, Indianapolis, Philadelphia, Pennsylvania and Fort Worth, Texas. The only exception among the top eight cities was Columbus, Ohio where evictions decreased by 7% for the time from August 29 to October 31 compared with June 20 to August 22. All in all, Eviction Lab found an upwards trend in eviction filings in 22 out of 28 cities where all eviction bans had ended as well as in five out of the six states it is tracking.

The Supreme Court decided to uphold a lower court’s decision to rule the CDC’s moratorium unlawful, since it was seen as exceeding the agency’s authority. Through the pandemic’s ebbs and flows, emergency rental assistance has still not reached many tenants, likely contributing to the rise in evictions. As of September 2021, around $10 billion out of the Emergency Rental Assistance program’s $46.6 billion budget had been given out.

Voices from the Democratic Party had condemned the move, according to the New York Times, while landlords were in favor, saying that the burden from the moratorium was too large, threatening their own livelihoods. While the CDC moratorium did offer protections to tenants, they could still be taken to court by their landlords, as seen in the many eviction filings present in Eviction Lab’s data that were filed before the date of the Supreme Court ruling.

The numbers on the website actually suggest that local eviction moratoriums are much more effective than the one that was issued by the CDC. These are still active, for example, in Boston and Austin, Texas. In the two cities that are comparable in size to Indianapolis, Fort Worth, Texas and Columbus, Ohio, average weekly eviction filings remained in the lower double digits, compared to several hundred in the aforementioned cities even before the CDC ban ended. In one city, Minneapolis-St. Paul, the local moratorium ended shortly after the CDC one, causing a rapid rise in eviction filings, but – likely because of the power of the local ban – they still remain in the double digits on an average weekly basis. The city was excluded from the graphic for this reason as where those places where local eviction moratoriums were still in place.