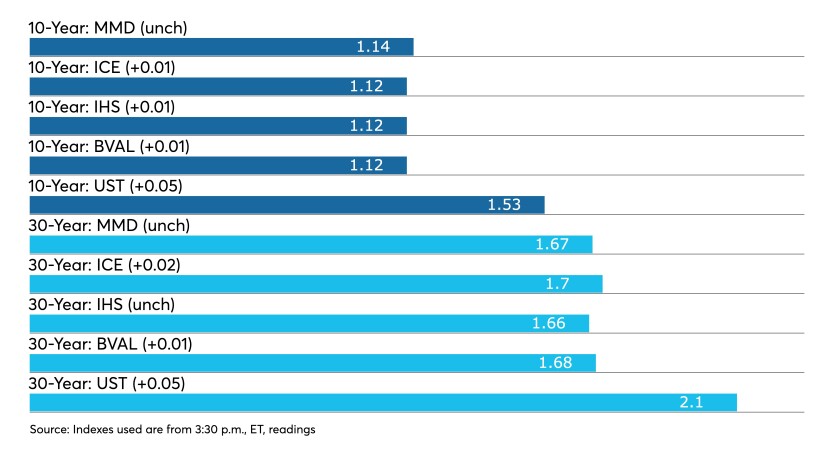 Municipal triple-A benchmark yield curves were mixed, with some weakness arriving later in the afternoon, but the asset class outperformed a risk-on trade in equities that moved U.S. Treasury yields higher.

A softer tone later in the day emerged and ICE Data Services cut their scales one to two basis points outside of five years, Bloomberg BVAL saw a basis point cut in spots along the curve, mostly out long, while IHS Markit cut one in 10-years while Refinitiv MMD was unchanged on the day.

The end of September witnessed increased spread within the investment-grade space, “and we are now at cheaper relative value ratios, and valuations for higher-quality cohorts have created some relative interest,” said Jeff Lipton, head of municipal fixed income research at Oppenheimer.

The increase in yields and spread widening across municipal sectors has given some pause to high-yield investors after months of stagnation. An increased focus on credit differentiation is starting to emerge.

“… Any significant market sell-off would likely impact high-yield performance the most, with more pronounced widening in credit spreads and we have witnessed the first outflow in high-yield cash in some time,” Lipton said.

“The days of blindly buying any and every deal that comes to market are probably over,” Venditti said. “We’ve been in an environment where risk has paid and buying the longest, worst bond has been a fail-safe way to invest. We’re returning to a period where bottom-up fundamental value investing is going to outperform.”

Secondary selling has fallen some but lower-rated credits have been a larger portion of bid lists, upwards of 25%.

“Investors who have been out the risk spectrum, it makes sense for them to take one step down the risk ladder,” Venditti said. “I’m still relatively bullish on munis, but I do think the days of them going up and up every single day are probably over, and you’re going to have to attack in a smarter, well thought out way.”

Lipton said performance trajectory for the asset class is less clear as the fourth quarter gets underway and uncertainties abound for all sectors.

“Although we believe that munis still have the ability to generate positive performance, admittedly such performance could be compromised should technicals become much less constructive, prospects for higher taxes and President Biden’s overall legislative agenda fade considerably, and should Washington’s political dysfunction create further bond market dislocation and spread widening,” he said.

“We expect growth to increase. We expect inflation to peak and continue to roll over. And hopefully the transition to a higher interest rate environment is rather moderate and slow, which affords us a rather positive outlook for the financial markets,” he said.

Inflation should come down, with the recent personal consumption expenditure indexes at 30-year highs providing the peak, Colbert said. But, he noted, inflation remains “a lot stickier than people thought. And it’s a lot stickier than the Fed thought.”

The added inflation “has caused interest rates to rise,” Colbert said. “And that’s probably the biggest risk to any economic outlook that we have, is how fast interest rates are likely to rise.”

The coronavirus will continue to impact the economy, he noted. “I think the number one factor to focus on, still, is the coronavirus,” since it will drive or stall growth depending on the number of new cases.

Indeed, the surge in COVID cases as a result of the Delta variant “has disproportionately affected service industries,” said Berenberg chief economist for the U.S., Americas and Asia Mickey Levy. “We expect demand for services to remain strong, underpinned by growth in employment, wages, and declining daily COVID cases, but supply constraints will continue to weigh on the service sector.”

The Institute for Supply Management’s services PMI rose to 61.9 in September from 61.7 in August. Economists polled by IFR Markets expected a 59.5 read.

“The inventory sentiment sub-index remains in contractionary territory,” Levy said. “Given the pervasiveness and persistency of the ongoing supply disruptions, businesses will face substantial challenges meeting demand and replenishing inventories in the short term.”

While the PMI has dipped from summer highs, Tuesday’s read “suggests that activity hasn’t meaningfully stalled in the sector despite the rise of the Delta variant,” said Wells Fargo Securities senior economist Tim Quinlan and Economist Shannon Seery. “A decline in the supplier deliveries index and improvement in inventory sentiment suggests supply issues may be improving, albeit only incrementally.”

Also released Tuesday, the international trade deficit widened to $73.3 billion in August from $70.3 billion in July. Economists expected a rise to $70.5 billion.

“Tangled supply chains and severe transportation bottlenecks continued to be on full display,” said Quinlan, Seery and Economic Analyst Sara Cotsakis in a note. “The better-than-expected outturn for imports in [Tues]day’s report suggests net exports will be less of a boost to growth than the half-a-percentage point we currently have penciled in for the third quarter.”

On Monday, the Biden administration said its trade policy with China “essentially will keep existing tariffs in place,” but allow U.S. importers to request exemptions, they said. “With many industries already reeling from higher input costs amid supply shortages, this development should provide some relief to industries whose only supplier may be China.”

Caitlin Devitt contributed to this report.