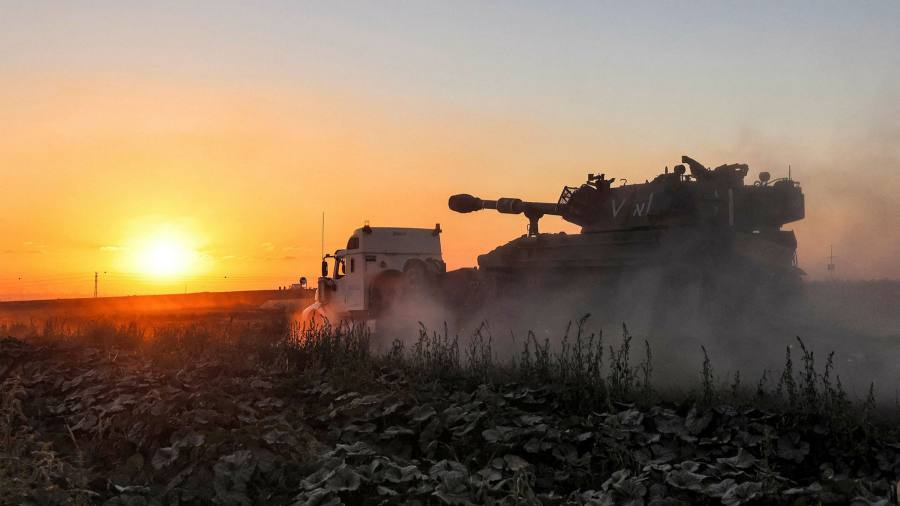 Israel said it had deployed ground troops in its assault on Hamas in the Gaza Strip after five days of relentless bombing runs aimed at the Palestinian militant group that has fired more than 1500 rockets into the Jewish state, the Israeli army said.

“Israel Defense Forces air and ground troops are currently attacking in the Gaza Strip,” the army said in a statement. A military spokesman later clarified that no Israeli forces had entered Gaza.

But the deployment of ground troops in the operation marks an escalation of the five-day conflict and raises speculation about whether Israel is planning to invade the strip for the first time since a conflict in 2014 killed 2,000 Palestinians and 72 Israelis.

Israel and Hamas have fought three wars since the militant group took control of the strip in 2007.

Israel has for five days been launching a barrage of air strikes against militants in Gaza, killing 103 Palestinians, including 38 women and children, according to health officials in the strip. A total of 580 have been wounded.

Despite the bombardment, Hamas has continued to fire salvos of rockets deep into Israel, and on Thursday caused Israeli authorities to reroute international flights from Tel Aviv. The militants have killed seven Israelis this week, including a soldier and a child.

Israel had positioned additional troops — including two infantry brigades and one armoured — near the Gaza border and called up 9,000 additional reservists on Thursday. The military has previously said it was considering all scenarios, including a potential ground operation.

With no let-up in the violence, Egyptian officials were trying to broker a ceasefire, a western diplomat said. Hady Amr, the US state department’s top official on Israel and Palestinian affairs, was also on his way to Israel as part of the Biden administration’s attempts to de-escalate the crisis.

Antony Blinken, US secretary of state, told reporters on Thursday that Washington was deeply engaged in efforts to de-escalate the situation. Russia’s president Vladimir Putin and UN secretary-general António Guterres also called for an end to the fighting on Thursday. But the western diplomat said Israel had previously rejected efforts by Egypt, which shares borders with Israel and Gaza, to halt the fighting.

Israel previously invaded Gaza during wars with Hamas in 2009 and 2014, operations that devastated the impoverished Mediterranean strip. The conflicts killed more than 1,000 and 2,000 Palestinians respectively. However, Hamas has been able to maintain a large arsenal of mostly homemade rockets. Since the 2014 war, Israel has been reluctant to send troops into Gaza for fear of its soldiers being kidnapped and other risks associated with such operations.

Israel has been ramping up its campaign against Hamas as the country reels from the worst communal violence in the country in years.

Violence between Israeli Jews and minority Israeli Arabs erupted in several Israeli towns this week, shaking the nation to its core, and opening up a domestic front that led prime minister Benjamin Netanyahu to vow to quell rioting with “force, a lot of force”.

The Arab-Israeli conflict has for more than a decade been dominated by fighting between Israeli forces and Palestinian factions in the occupied territories, but the communal violence added a dangerous dynamic, turning up the pressure on the Israeli government.

Israeli Arabs account for about a fifth of the Jewish state’s population, carry Israeli passports and vote in the country’s elections. But they complain of institutional and social discrimination and their sympathy for the Palestinian cause has made them a target for rightwing politicians.

Speaking on Thursday evening in the city of Lod, which has endured some of the worst communal violence, Netanyahu vowed that the security services, working in tandem with the Shin Bet domestic intelligence agency, would be given a free hand to use force to put down the riots, telling them not to worry about “commissions of inquiry, investigations and checks”.

“You have the backing, do not be concerned,” he said. “In putting down rioters one needs to use force, a lot of force.” He said he was considering approving the use of administrative detentions, commonly used in the occupied West Bank to detain Palestinians for long periods without access to lawyers, and bringing in the army.

In a further sign of the growing crisis, Israel said three rockets were fired into northern Israel from Lebanon on Thursday, underling the risk of yet another front opening up. The Israeli military said the rockets landed in the Mediterranean, causing no damage,

It was not clear who launched the rockets and Israel’s northern border with Lebanon has been quiet in recent months. Lebanon is home to Hizbollah, the Iranian-backed movement that fought a month-long war with Israel in 2006, as well as Palestinian refugees and militants. A Lebanese army official said the situation about the rockets was still unclear. He dismissed local media reports that Palestinians had been arrested.

The UN peacekeeping force in Lebanon, Unifil, said Maj Gen Stefano Del Col, its head of mission, had spoken to the Lebanese army and IDF to urge de-escalation after this latest rocket attack. A spokesperson for Hizbollah did not immediately respond to a request for comment.