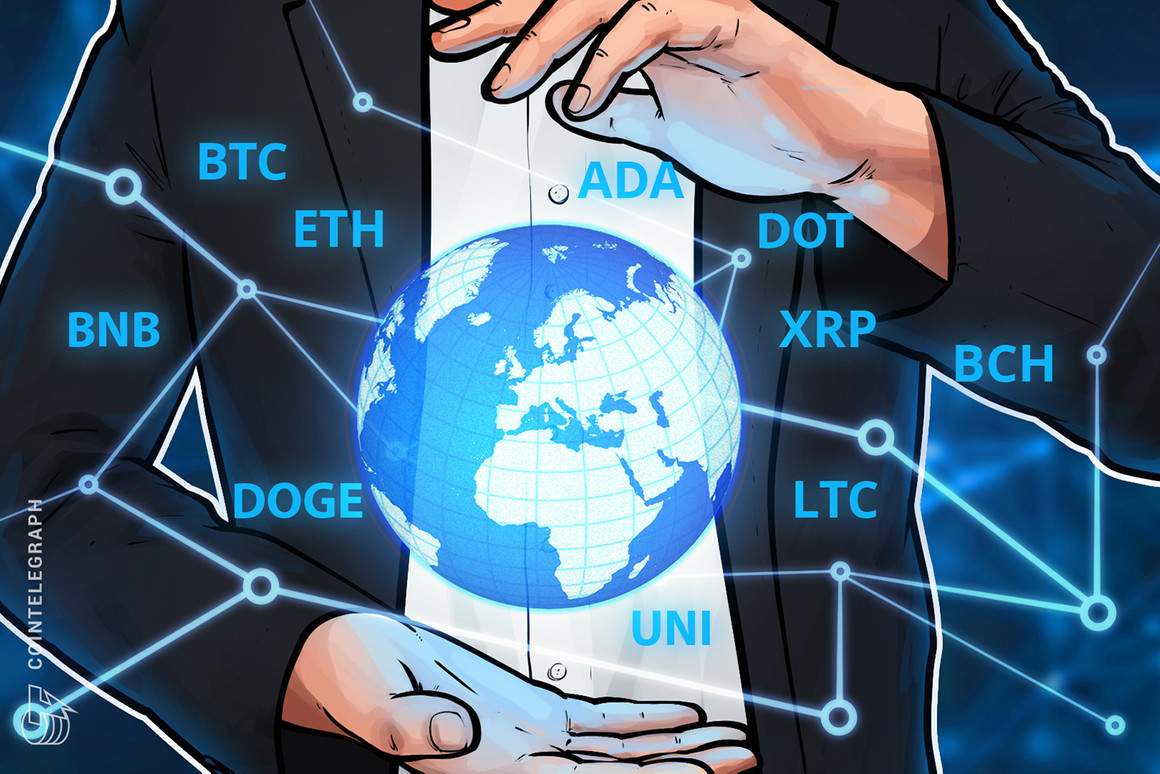 As Bitcoin price crashed below $50,000, mainstream media highlighted that the selling across the market could have been triggered by reports that the Biden administration proposed increasing the capital gains tax to 39.6% from the current 20% for people earning more than $1 million a year.

In other news, there was an apparent exit scam carried out by Thodex exchange owner Faruk Fatih Özer, which has affected about 391,000 users of the Turkish crypto exchange. Rumors are afloat that the owner may have fled the country with nearly $2 billion worth of crypto assets.

U.S. equity markets also sold off on April 22 as the tax hike rumors rattled investors but the S&P 500 has bounced back sharply today, indicating that market participants have discounted the news.

After the fall, the next big question on the minds of investors is whether the correction will deepen or is this the opportune time to open new positions.

Let’s analyze the charts of the top-10 cryptocurrencies to identify the critical support and resistance levels that will indicate the start of a trending move.

The 50-day simple moving average ($56,793) has flipped to resistance and the bulls could not push and sustain the price above it on April 19 and April 20. That may have resulted in profit-booking by short-term traders, which pulled Bitcoin’s (BTC) price below the psychological $50,000 mark today.

The moving averages have completed a bearish crossover and the relative strength index (RSI) is near the oversold level, indicating a possible change in sentiment. This is the first time the RSI has plunged below 40 since the start of the bull trend in October of 2020.

If the bears can sustain the price below $50,460, the BTC/USDT pair could continue to slump towards the next critical level at $43,006.77 where buyers are likely to step in aggressively. The extent of the rebound from this level will give better insight into whether the correction has ended or not.

This negative view will invalidate if the price rebounds off the current level and rises above the moving averages. The next leg of the uptrend could start after the bulls push the price above $64,849.27.

Ether (ETH) broke above $2,545.84 on April 22 and hit a new all-time high at $2,645. However, the long wick on the daily candlestick shows that the bulls could now sustain the breakout. This may have trapped aggressive breakout traders, who might have been stopped out of their positions today.

The selling continued and the ETH/USDT pair dropped to $2,102.24 today. However, the long tail on the day’s candlestick suggests the bulls aggressively purchased the dip close to $2,040.77. This indicates the sentiment remains positive and the buyers are accumulating at lower levels.

Binance Coin (BNB) turned down from the $600 to $638.56 resistance zone on April 21, indicating that the bears are active at higher levels. The sellers pulled the price below the 20-day exponential moving average ($479) today but could not sustain the lower levels.

The long tail on today’s candlestick suggests the bulls continue to buy the dips to the 20-day EMA. The buyers will now again try to push the price to $600 and challenge the overhead resistance zone.

If they can thrust the price above $638.56, the BNB/USDT pair may start the next leg of the uptrend, which could reach $832.

However, if the price turns down from the overhead resistance zone, the pair could remain range-bound for a few days. The first sign of weakness will be if the price dips and sustains below the 20-day EMA. Such a move could result in a drop to the 50-day SMA ($357).

The failure of the bulls to build upon the rebound off the 20-day EMA ($1.22) on April 21 shows a lack of buyers at higher levels. The bears pounced on this opportunity and broke the 20-day EMA today, pulling XRP to the 78.6% Fibonacci retracement level at $0.86.

The bulls purchased the dip today but they are likely to counter stiff resistance at the 20-day EMA. If the price turns down from the 20-day EMA, the possibility of a break below the 50-day SMA increases. That could pull the price down to $0.56.

Alternatively, if the bulls push the price above the 20-day EMA, the XRP/USDT pair could rise to $1.46. If the price turns down from this resistance, the pair may remain range-bound for a few days. The bulls may be back in command if the price rises and sustains above $1.46.

Vertical rallies unless backed by strong fundamentals witness waterfall declines and that is what was seen in Dogecoin (DOGE) price. The altcoin broke the 20-day EMA (0.20) support today and dipped to $0.15, just above the 78.6% Fibonacci retracement level at $0.14.

However, the flat 20-day EMA and the RSI below 57 indicate the bulls have lost their advantage. If the pair loses ground and closes below the 20-day EMA, the selling could intensify further and a drop to the 50-day SMA ($0.10) is possible.

Cardano (ADA) turned down from the 20-day EMA ($1.24) on April 21, suggesting the sentiment has turned negative and traders are selling on rallies. The bears broke the $1.03 support today but have not been able to sustain the lower levels.

On the contrary, if the price again turns down from the 20-day EMA, the bears will attempt to sink the pair to $0.80 and then to $0.70. Such a move will suggest the start of a new downtrend.

Polkadot’s (DOT) recovery attempt hit a barrier at the 50-day SMA ($37) on April 22, suggesting the sentiment has turned negative and traders are offloading their positions on rallies.

The selling picked up momentum today and the DOT/USDT pair dropped to the $26.50 support. However, the sharp bounce off this support suggests the bulls are defending this level aggressively.

If the bulls sustain the recovery, the pair could remain range-bound for a few more days. A breakout of the moving averages will be the first sign of strength while a break below $26.50 will signal the possible start of a new downtrend.

Uniswap (UNI) rose above the $35.20 overhead resistance on April 21 and again on April 22. However, on both occasions, the altcoin met with stiff resistance at higher levels as seen from the long wick on the day’s candlestick.

The failure to sustain the breakout above $35.20 may have trapped the aggressive bulls who dumped their positions today. If the UNI/USDT pair closes below the 50-day SMA today, the decline could extend to $25.52 in the next few days.

A strong rebound off this support will suggest that traders are defending this level aggressively. That could keep the pair range-bound for a few more days. On the other hand, if the $25.52 support cracks, the down move could extend to $20.

This neutral to negative view will invalidate if the price turns up from the current level and rises above $35.20.

The bulls tried to resume the up-move on April 21 and 22 but met with stiff resistance at higher levels as seen from the long wick on the candlesticks. The bears continued their selling today and pulled Litecoin (LTC) below both moving averages.

The long tail on today’s candlestick suggests the bulls are buying at lower levels and trying to stage a recovery. However, they are likely to face stiff resistance near the 20-day EMA ($250.)

If the price turns down from the 20-day EMA, it will suggest that the sentiment has turned negative and traders are selling on rallies. That will increase the possibility of a break below the 50-day SMA. If that happens, the LTC/USDT pair could plunge to $168.

This negative view will invalidate if the price turns up from the current level and rises above $246.96.

The relief rally in Bitcoin Cash (BCH) reversed direction from $998.49 on April 21 and the selling intensified today when the bears broke the 20-day EMA ($797) support. However, the bulls are attempting to stage a recovery from the intraday lows as seen from the long tail on the candlestick.

If the BCH/USDT pair sustains the recovery, it will suggest buying at lower levels. The bulls will then try to push the price above the downtrend line. If they succeed, the pair could again rise to $1,000 where the bears will mount stiff resistance.

The flat 20-day EMA and the RSI near the midpoint suggest the bulls have lost their advantage. If the price turns down from the downtrend line, the bears will make one more attempt to sink the price to the 50-day SMA ($629).

Such a deep fall is likely to delay the next leg of the uptrend and keep the pair range-bound for a few days.

These are shaping up to be the best and worst luxury real estate markets for 2023
November on pace for best month since 1986
UK house prices fall at fastest pace since June 2020
Defying forecasts, crude oil prices have wiped out most of this year’s gains and could head lower
Crypto Lender Blockfi Files for Bankruptcy Protection to ‘Maximize Value for All Clients’