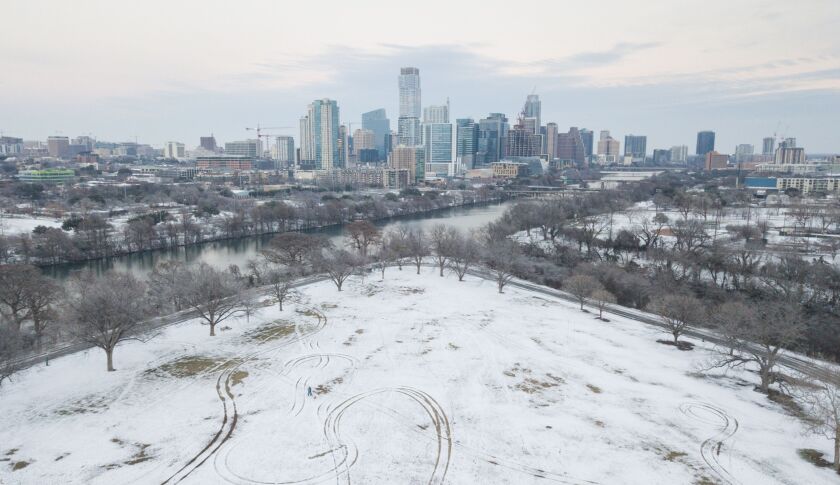 Texas temperatures have returned to seasonal norms, but the public finance crisis from last week’s deep freeze is just beginning.

The winter blitz led to blackouts, frozen pipes and a 10,000% surge in wholesale power prices in an economy already struggling with the COVID-19 pandemic.

“I have a feeling I grossly underestimated the cost of the Texas freeze,” said Tom Kozlik, head of municipal strategy and credit at Hilltop Securities, referring to his Thursday estimates of $25 billion to $30 billion in economic impact.

The city of Denton’s power utility, serving 140,000 people, spent $300 million over six days buying power from the Electric Reliability Council of Texas, the arbiter of the Lone Star State’s electricity grid. That is nearly five times the amount it spent to buy power from the grid for all of 2020.

To meet its ongoing cash needs, the city issued $100 million of commercial paper and is considering raising its maximum authorization to $300 million from $100 million to provide additional capacity for power purchases.

Another option is issuing bonds for programs that are currently financed from the general fund, thereby freeing up revenue, the city said in it a voluntary disclosure Thursday on the Municipal Securities Rulemaking Board’s EMMA disclosure website.

“However, despite combining these two approaches, the City determined that cash flow needs required for Electric to continue purchasing power through next week may not be met,” the disclosure said. The city has AA-plus general obligation bond ratings from both Fitch Ratings and S&P Global Ratings.

S&P, in a comment on the Texas situation, said it does not anticipate any immediate credit impacts from the rotating outages because the effects on revenues are likely to be modest compared to annual income.

“However, we believe the customer ire utilities might face after implementing the rotating outages (or load shedding) could challenge their rate-making flexibility,” analysts wrote.

Republican Gov. Greg Abbott, a strong proponent of the state’s oil and gas industry, added electrical power to his emergency agenda when temperatures across the state hit the single digits and rolling blackouts began.

Abbott asked the 87th Session of the Texas Legislature to fund winterization of power plants to prevent future outages.

Abbott blamed ERCOT, a nonprofit set up and organized under the authority of the state government he heads, for the failure and inaccurate reassurances that the power grid was safe.

”ERCOT failed on each of these measures that they said they had undertaken,” Abbott said. “Texans deserve answers on why these shortfalls occurred. And how they’re going to be corrected and Texans will get those answers.”

The ERCOT grid covering most of Texas is one of three major power networks in the U.S. Some parts of Texas are tied into the grids serving the western and eastern states.

By Friday, the crisis was averted as power plants came back online. ERCOT’s board will hold an emergency meeting on Wednesday to appraise the crisis.

Insurance industry officials initially estimated the economic impact of the freeze at $19 million and compared the event to Hurricane Harvey that devastated the Texas coast. But the cost could be much higher.

Natural gas prices, which had hovered around $3 per million British thermal units, soared to upwards of $300/MMBtu and even higher in some cases, according to the American Public Power Association.

“With demand for natural gas rising in response to the cold temperatures, our members had no choice but to purchase gas at the inflated prices or pay even steeper penalties to ensure their customers could continue to heat their homes or to allow natural gas-fueled electric generation to continue operating,” the association wrote in a letter to the Federal Energy Regulatory Commission.

“In one case, a municipal utility spent its monthly gas budget each day over President’s Day weekend,” the letter said. “In another, a joint action agency expended three times its annual gas purchasing budget just to buy gas for its customers for four days.”

The soaring energy prices led to some individual customers who signed up for programs allowing them to pay unfiltered wholesale rates receiving electric bills for thousands of dollars.

The Texas Public Utility Commission said the maximum wholesale market price for electricity is reserved for extreme scarcity conditions to encourage any and all generation able to come online.

“The individual residential consumer is not exposed to wholesale market prices, unless they are among the very few seen recently in the news with extremely high electricity bills having chosen a contract that is indexed to those prices,” the PUC explained.
At an emergency meeting on Feb. 15, the PUC suspended disconnections for nonpayment.

The bitter cold temperatures caused wind turbines to freeze and made extraction of natural gas extremely difficult. Critics also pointed to ERCOT’s energy-only market structure, whereby generators are paid for producing energy but not for reserve capacity for future demand peaks or emergencies.

In San Antonio, the city’s two public utilities for water and power were mutually affected. On Tuesday night, CPS Energy asked the San Antonio Water System, its biggest customer, for permission to shut down pump stations. Like cities across the state, San Antonio’s water system was already suffering from low pipe pressure and broken lines.

Austin Energy, the city’s public utility, reported 35% of its customer base was without power. The utility was unable rotate its outages because it cannot drop any additional load on pre-identified critical load providing essential services. Some customers have been without power for more than 48 hours. Rotating outages are meant to last roughly 15 to 45 minutes.

Dozens of deaths were reported. An 11-year-old boy was found dead in his Conroe home. The initial cause of death was listed as hypothermia.

In Abilene, a 60-year-old man was found frozen to death in his home on Wednesday. His wife, who was by his side and taken to a nearby hospital for treatment, said the couple had lost power for three days.

In nearby Colorado City, Mayor Tim Boyd resigned after posting a statement that some considered insensitive.

“No one owes you [or] your family anything,” Boyd wrote in a now-deleted Facebook post. “I’m sick and tired of people looking for a damn handout!”