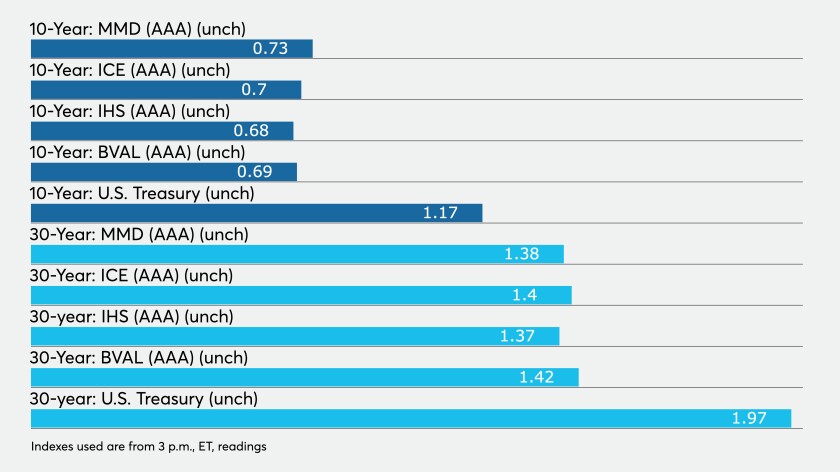 The 30-year U.S. Treasury hit 2% overnight but settled at 1.97% near the close while equities rose for the sixth day on stimulus and vaccination hopes.

Municipals did more of the same — Triple-A benchmarks all reported no changes from Friday’s levels with no concessions in light secondary trading with an eye on the week’s primary.

What munis face is balancing more than $12 billion this year in fund flows against rising UST yields, which is challenging buyers’ tolerance for declining relative value.

Because of this, “it comes as no surprise that wider sectors stand out for more impressive moves as compared to generic GOs and essential service bonds — what is striking is the strength of spread compression,” according to Kim Olsan, senior vice president at FHN Financial.

A sale of Aa2/AA Rochester, Minnesota, Health/Mayo Clinic (Aa2/AA) 5s due 2034 (noncallable with a hefty $150 handle) traded at +12/AAA, nearly 10 basis points through its recent evaluated pricing and 30 basis points tighter than the implied AA Healthcare/AAA GO spread, she noted.

“Similar intermediate healthcare credits are trading along comparable spreads to essential service names, which has moved the year-to-date return to nearly 1.25%,” Olsan said. “In longer-dated bonds, the contraction is more at the coupon level — AA 3s due in 20 years are trading at indicative spreads of +15 to 4s, or nearly half their spread from mid-2020.”

The primary will get a taste of high-grade Washington Tuesday with nearly $900 million in four competitive sales, which should give an indication for benchmarks with the first state-level general obligation name since December. The New York Metropolitan Transportation Authority will sell three competitive deals, two of which are green bonds, totaling more than $700 million also on Tuesday, which will also give a sense of how investors are handling COVID-19-challenged credits.

Inflation concerns?
Spending expectations rose to its highest level since June 2015, a 0.8-point gain to 4.2% in January, according to the Federal Reserve Bank of New York’s Survey of Consumer Expectations. Income is expected to grow 2.4%.

The probability of higher unemployment a year from now rose to 40.2% in January from 38.9% in December. The chance of losing your job fell in January, while the chance of finding a new job if you lost yours rose.

Inflation expectations held at 3.0% for both a one-year and three-year term.

And inflation has remained low, despite the money supply rising 22%, noted Scott Colbert, executive vice president and chief economist at Commerce Trust Co. The reason inflation hasn’t surged despite the substantial amount of money printed is that businesses remain cautious, he said. “And so this money isn’t really turning and pushing rates higher.”

And should inflation start to rise at some point, Colbert said, “just think how easy it is for the Fed to raise interest rates a little bit and slow some of this down.” In fact, he called inflation “a luxury good,” and the Fed would welcome some more inflation at this point.

She added money supply growth “appears to be overpowered by restrained consumption both at home and globally. In other words, for now, weakness in the velocity of money appears to be trumping the implications of growth in the money supply in the near to medium-term.”

But without spending reductions or tax hikes, “unfettered government stimulus” will cause “unmanageable debt and deficits,” Piegza said, with “significant inflationary implications down the road.”

“On average in each recovery, inflation has been coming down and down and down,” Commerce’s Colbert added. “I don’t doubt in this recovery that it won’t be any lower than it was in the last recovery, because we’ve been so aggressive about stimulus, but inflation is not really our problem.”

A recovery has begun. “The average economic recovery lasts seven and a half years since 1960 in this country,” he said. “And they tend to get longer and longer than the last one, which was 10 and three quarter years.”

Bryce Doty, senior vice president and senior portfolio manager at Sit Fixed Income Associates, says the proposed Biden budget could cause a spike in inflation. The $4 billion plan “may be too much of a good thing.”

Demand for 30-year Treasury bonds generally declines with “almost any good news, especially if it could lead to higher inflation and erode the effective or real return of bonds,” he said. “And 2021 could be the strongest economic rebound in history.”

With stimulus, the Fed’s $120 billion a month of asset purchases, pent-up consumer demand, plus elevated savings levels, “bond investors have reason to be nervous and it is no surprise to see inflation expectations rising to over 2%.”

Inflation may not thrive once pent-up savings are spent, he said. “Unfortunately, this will likely occur when the Fed is reducing the amount of money they are printing and $2.5 trillion of federal stimulus spending runs out. So while 2021 could be like a wild party, there could be a wicked hangover in 2022 and 2023.”

Separately, The Conference Board reported the employment trends index rose for the ninth month in a row, gaining in January to 99.27 from 98.55 in December, but remains 10.0% below year-ago levels.

“The employment trends index has been increasing in recent months, with the largest contributing component being the number of jobs in the temporary help industry,” said Gad Levanon, head of its Labor Markets Institute. “Over the next few months, expect some uncertainty around job growth, especially if some potentially adverse COVID-19 developments manifest – namely, the rapid spread of more aggressive virus strains. On the upside, however, by spring we expect strong job growth to resume and continue throughout the remainder of the year.”

With vaccines available, he said, businesses may start adding jobs “at an accelerated pace” by late in the spring, mostly “in in-person services, such as restaurants, hotels, recreation, passenger transportation, and childcare services,” pushing the unemployment rate near 5%.

The University of Washington (Aaa/AA+//) is set to price $325 million of taxable and tax-exempt general revenue and refunding bonds on Wednesday. Goldman Sachs & Co. LLC is head underwriter.

The City of Downey, California (/AA//) is set to price $113.7 million of taxable pension obligation bonds on Tuesday. BofA Securities is bookrunner.